As applications span more platforms, the days of open-systems and mainframe developers sitting in silos on opposite ends of the office are coming to an end. Enterprises need their developers to understand concepts and code tied to both front-end and back-end systems.

So, what should these developers learn about each other? A multitude of stark technical and terminological differences exist between the two computing worlds, for lack of a better word, but in this two-part series we’ll just focus on a few high-level concepts.

Open-systems developers are usually polyglots who understand and use a diverse set of programming languages and tools. Most have had exposure to web development, web services and Java and Javascript, but beyond those commonalities, their diverse experiences and versatility allow them to wear multiple hats.

Greenfield development is easier in open-systems than on the mainframe, in part, because there are more examples of how to do things, places to get help and thousands of snippets of code available online and in open source libraries via Stackoverflow and Github.

2. Open-systems development is open and lightweight.

Open-systems developers tend to have a lighter-weight development process than mainframe developers. In some cases, open-systems teams have spent a decade refactoring their code to be more modular and thus easier to change in small increments. These applications are usually composed of hundreds or thousands of files that are always compiled and run together, and you don’t need JCL to run them.

Generally, access and control are more open than in mainframe development. Developers have easy pre-built access to modern runtimes and can access their development environments from anywhere at any time.

REST-enabled applications with well-defined APIs are standard in open-systems development because REST APIs easily evolve over time and many platforms have a plugin architecture with plugins for just about anything you can imagine.

Developers usually have the ability to fully compile and run a copy of the application locally on the desktop environment without a need to worry about what other developers are doing. After completing work in their local environment, automation is typically used to move the application into shared testing and production environments.

3. Open-systems development is big on performance.

Most distributed applications tend to be online, so open-systems developers don’t have to deal with batch-processing windows, making it easier to focus on 1) making their programs multi-threaded to take advantage of the many CPUs available on modern servers and 2) achieving good application performance—not to say mainframe developers don’t worry about performance, too.

Multithreading isn’t exclusive to open-systems computing, but it’s done differently than on the mainframe, where the COBOL run-time itself doesn’t support multithread execution and it’s not possible to have a “pure” COBOL multithreaded application. Instead, individual COBOL programs compiled with THREAD can be run multithreaded, but they need some help. IBM Enterprise COBOL for z/OS, V6.1 Programmer’s Guide suggests an application server, C/C++ drivers, Java threads and PL/I tasking are all ways to invoke the THREAD-compiled COBOL programs to accomplish this.

4. Automation and orchestration are the expected norms of open-systems development.

Though more modernization is coming to the mainframe in the form of cloud-integrations, IDEs, automation, visualization, APIs and more, manual processes and outdated tools are still staples and hindrances to agility in that space. This is in stark contrast to the agile, automation-fueled world of open-systems development.

Open-systems developers run development from cloud- and web-based IDEs and typically expect to do daily integration builds. They use open source and software stacks with several integrations with various tools to innovate rapidly. Use of automated unit testing is commonly part of the development process.

Automated builds and pipeline management make it possible to push up to hundreds of builds per day, and, vice versa, instantaneous rollbacks with self-healing remediation properties are becoming more prevalent.

Through automated infrastructure orchestration with built-in monitoring and analytics, open-systems developers can focus on development as well as see how an application is being used and how often, rather than spending time supporting infrastructure.

Even communication and collaboration are being improved through automation under things like ChatOps that connect people, bots and tools.

Finally, more open-systems teams are spending less time waiting on resources by leveraging the cloud. They only have to pay for the seconds their applications run, and it’s easy to lift and shift applications to any platform at any time.

Developers get easy and instance access to pre-built frameworks in the cloud like AWS Amazon machine images/instances and any major software provider, installed perfectly and ready in minutes.

Whereas most mainframe teams are just beginning to entertain DevOps, and many more are still in the process of convincing stakeholders to transition, most open-systems teams were early adopters of the philosophy and have been practicing it for years.

Open-systems teams are DevOps focused. Development and Operations collaborate seamlessly and transparently in de-siloed processes and integrated toolchains. They stay in close communication, from planning to deployment. They are nimble in decision-making and pivoting away from or toward ideas based on feedback. They fail fast and continuously learn from mistakes. They use what they learn to continuously innovate. 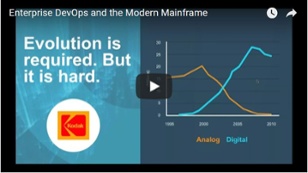 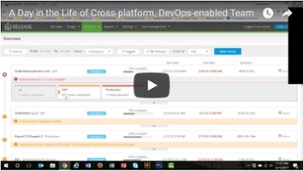 Steve Kansa is a product manager at Compuware. He has extensive experience in Agile application development across a wide variety of technologies and industries. Working with Compuware's Topaz products, he is focused on enabling modern DevOps capabilities for mainframe technologies.

Copyright © 2020 Compuware Corporation. All Rights Reserved.The Mainframe Software Partner For The Next 50 Years